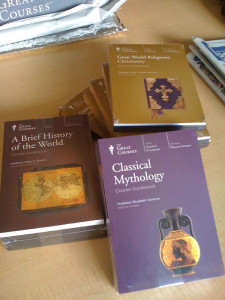 Just a sample of the learning ahead of me…

So… Some friends of mine realised when they reached for their 4yo’s book on planes, trains and automobilesto answer a question about how much fuel a 747 could hold in its wings that maybe their world had become a little too closed in. They promptly enrolled in Philosophy 101 to broaden their horizons a wee bit.

In the middle of a dinner party that I was really enjoying I realised that I felt like I had nothing to talk about except my day job and my writing. And I got the sneaking suspicion that I was half-way to being a social bore.

I’ve never exactly been a party-girl but the idea of being the one people smile tightly at while thinking of ways of excusing themselves… Horrors.  Now since then I’ve spoken to a few people who all assured me–genuinely as far as I could tell–that it isn’t at all true but by then the damage was done. I’d bored myself!  So I set about doing something to change that.

I signed up with a company called ‘Great Courses’ who provide thousands of hours of learning on audiobook, CD or DVD. One hundred hours of comparative religion. Classic mythology. A Brief History of the World. The story of Medival England. Big History: the big bang thorough to today.  All in 30-minute increments just perfect for driving to work, or walking the block, or while having breakfast. All with accompanying course notes. All presented by leading experts. And all 80% off. Yay.

But NO assessments, NO deadlines and NO problem listening to one over if you haven’t quite grasped it. I bought enough to learn something new every single day for a year. Awesome!

I’m only twelve lectures into ‘Big History’ but I’ve learned:

I can’t imagine what is still to come when we’ve squeezed the entire of creation (and billions of years) into just a quarter of the content.

So… the trick now will be to take that knowledge and absorb it and hold it close to me internally so that–in striving not to be a social bore–I don’t accidentally turn into a social know-it-all, way too excited by my own new learnings. And I’ll have to be patient, too. Can’t tell you how many times a week I see ‘The Story of Medieval England’ staring out at me expectantly from my iPod menu and know I have to finish the entire history of life, the universe and everything first.

The phrase ‘patience Grasshopper‘ has never been more apt.