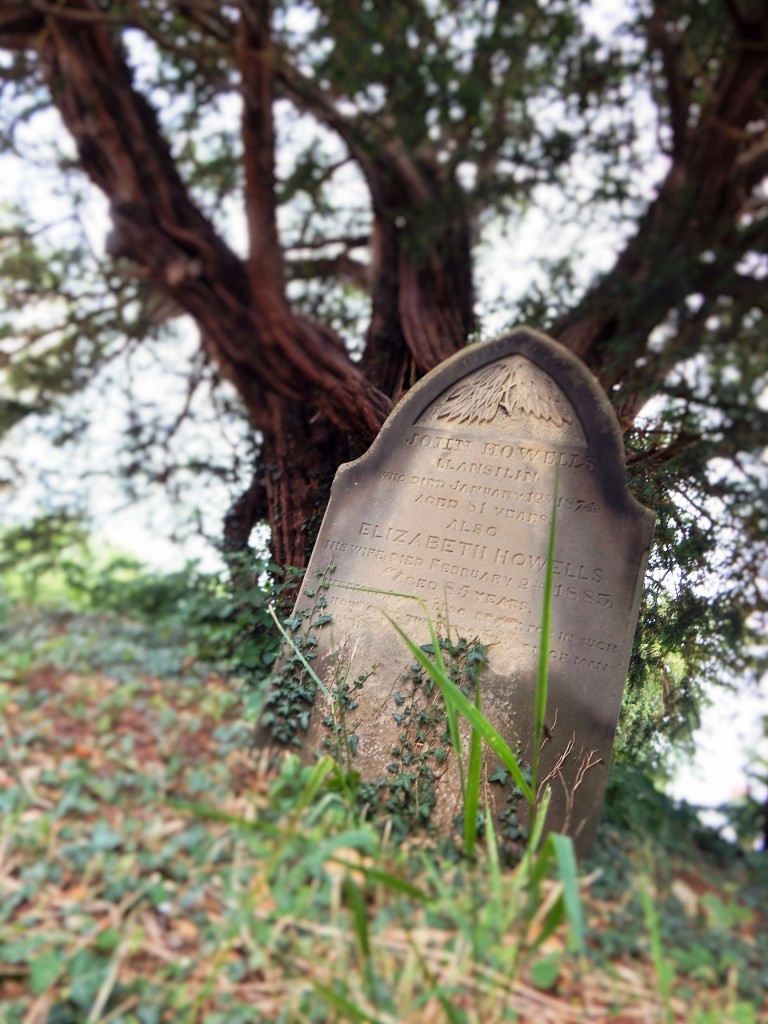 I bored my 6yo nephew senseless the other night when I had my family around to watch four hours of travel photos in a good, old-fashioned ‘slide night’. Many of my images were ancient wells and yew trees and I feel fairly certain I was the only interested one in the room after the first few yew tree examples.

So… prepare yourself. I’m about to get all fan-girl on you. I liked these trees and their heritage so much I’m basing a whole book series around them.

Yew Trees are STUNNING trees. They have such unique biology and tenacious survival adaptations and they are so strong and interesting to look at. They have a long and fascinating cultural and religious history and how could you not love a tree whose bark looks and functions more like scales? 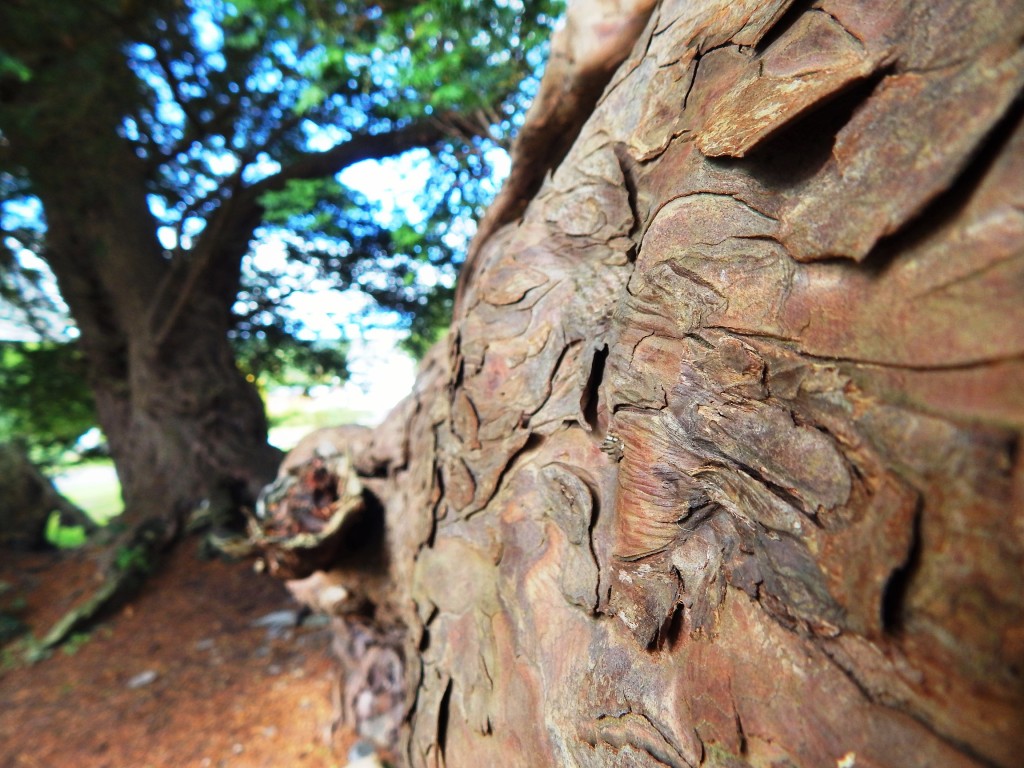 The yew has scales more than bark

The Yew (Taxus baccata) is a conifer, technically, and so I shouldn’t like it because I’m generally not a confier lover. It’s found naturally in western, central and southern Europe (the European Yew) in the north of African and Iran and in the southwest of Asia (Wikipedia) 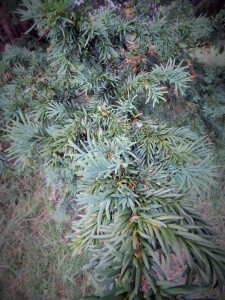 Pretty much every part of a yew tree is poisonous — a livestock-unfriendly alkaloid called taxine. Yew leaves (dried or fresh), sap, seeds and bark will all kill you if ingested in sufficient quantity. The whole tree even releases taxine as a hallucigenic gas on a really hot day. (Didn’t know that before I got all huggy with them in 30+ degree summer heat). Symptoms seem to progress from an accelerated heart rate, muscle tremors and convulsions to collapse, respiration distress, circulation impairment and finally heart failure.

About the only non-toxic part of them is the deadly looking, ruby-coloured berry which is actually sweet and delicious and irresistible for birds who gobble it up and then disperse the single seed inside it . Their beaks and soft digestive system doesn’t metabolise the seed’s waxy outer and so they are not poisoned by it before depositing it along with a rich fertilizer far from where it was eaten.

Yew trees are either male or female, but mounting evidence suggests they can change their gender with time which might explain why the Patriarch tree at Llanerfyl (didn’t quite get there, unfortunately!) can have some male and some female branches. Handy survival tool!

Yews generally grow to around 20/30m in height and have trunks about 2m around. Average lifespan if left unmolested is 400-600years but there are many, many examples of much more ancient yews than that (2000-5000years). So much so that a whole website/register has sprung up to record the most ancient (www.ancient-yew.com). I owe these guys a debt of gratitude for being a primary resource on my research trip around Wales. Go check out their site, it’s completely volunteer run and they’ve catalogued thousands of ancient, veteran and ‘notable’ yew sites.

I saw a heap of ‘younger’ yews in my travels (ie: 500-1000 years) but structured my trip around some of the oldest or most notable. Here’s a selection… 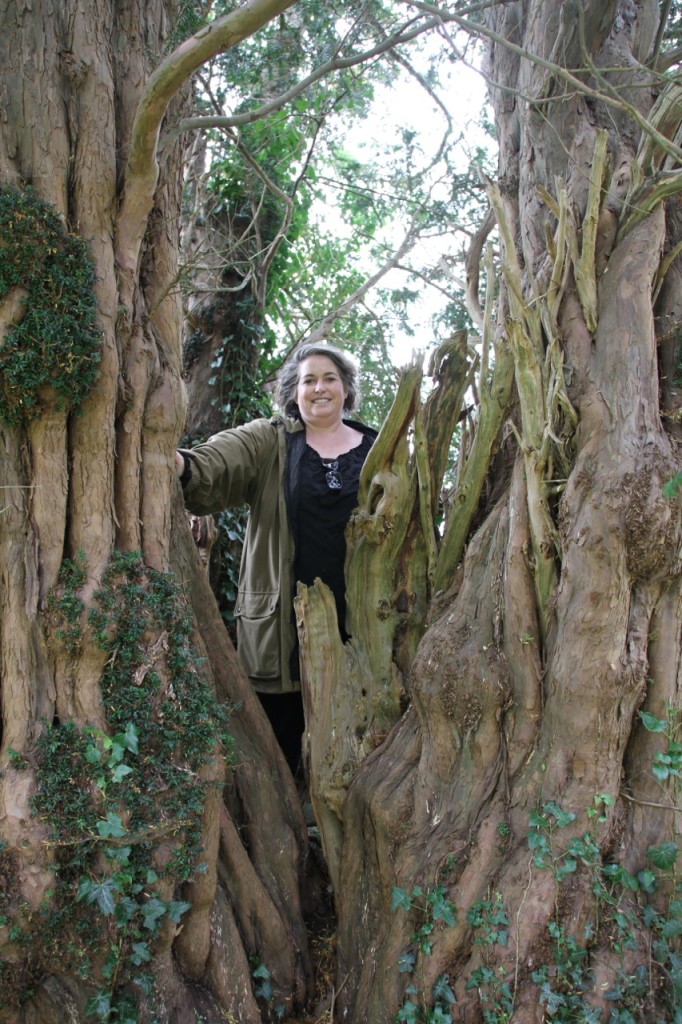 Llansilin – this site was in existence in the earl middle ages and is notable because it has four ancient yews and two veterans. A great first stop to see a lot of yew trees. For the record, I did ask the tree’s permission before boarding it for this photo. It offered no objections. 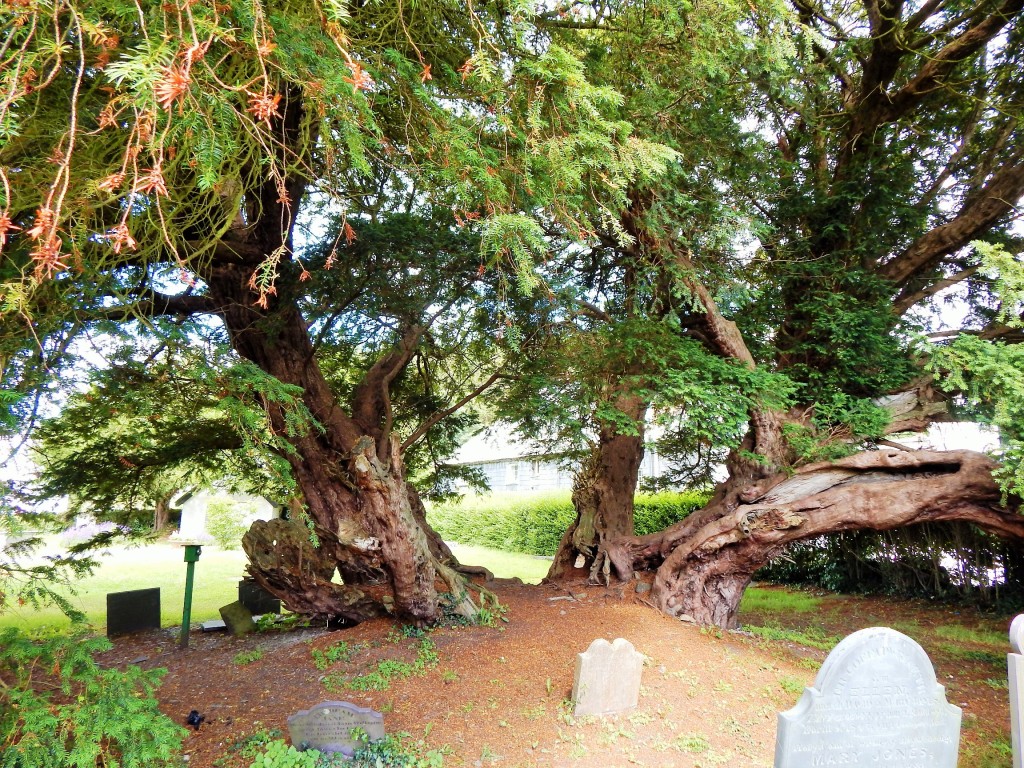 Llangernyw – up until very recently the oldest known tree in Wales (4000years). This male stands sleepily in an unassuming churchyard in the small town of Llangernyw (North Wales) just being all old and mysterious. One of the ’50 Great British Trees’. Doesn’t get as much traffic as you’d expect for the oldest in Wales and will probably get less now that it’s technically the second oldest. I don’t think it cares, really. It’s just doing what it’s been doing since Neolithic man was pottering around making burial mounds… Tradition tells of a 5th century saint who founded a church on the round site where (given its age) the tree had already been standing a long time, possibly with others. There are eight other male trees on the site none of them quite as old or impressive but, somehow, this site left me thinking of Arthur and his round table of knights.

Mynyddislwyn – Five yews, significant both for their advanced age but also as examples of rare yews with formalised/protected mounds. They sit in an ancient/circular configuration perched on a hillside 1000m above sea level, peering out over Monmouth. One in particular was so massive I can’t imagine how it could not be one of the oldest in Britain but smarter people than me know about it and aren’t as excited so I have to trust their science. But it was—without question—the most abundantly ALIVE yew I saw, just exploding with life. 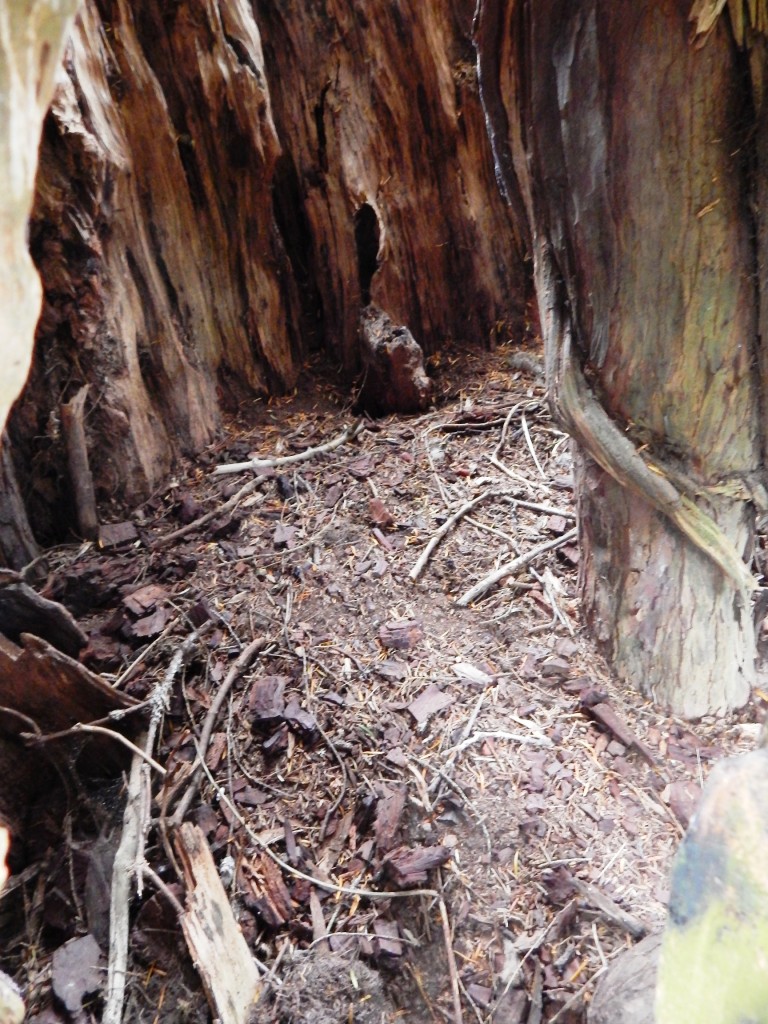 Capel y Ffin – another high site significant for the number of very old yews in a semi-circle, suggesting the site might originally have been pagan/round. Eight in total and all veteran or ancient. Some great examples here of how yew hollows could provide shelter for people and wildlife back in the day (great inspiration for story settings!). I could easily have curled up and had a nap in there, and it looks like I wouldn’t have been the first… 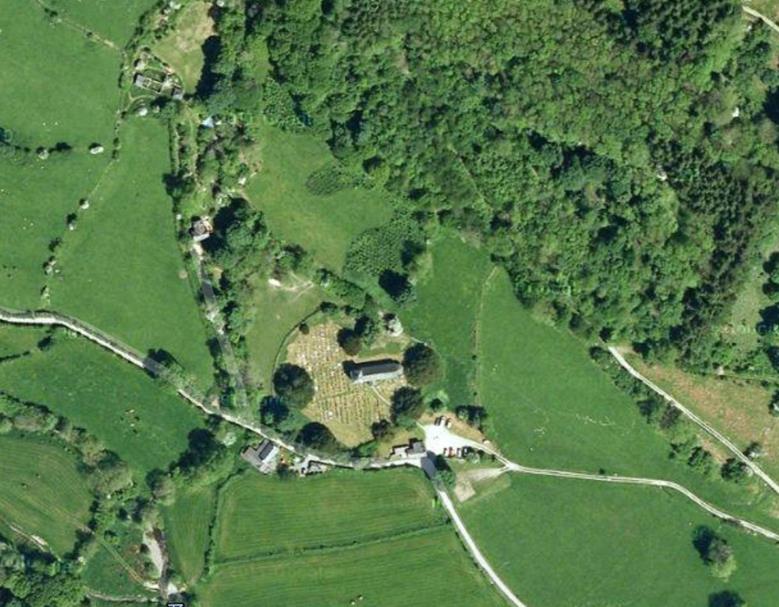 The beautiful Pennant Melangell is most striking from above where the veteran and ancient yew trees line the circular churchyard believed to be built above a pagan worship site. The trees outdate the church by a millennia.

Weighing in with the scientists

Another of the survival techniques employed by Taxus baccata is that even very old trees send up suckers (epicormic shoots) from the main tree, which grow thick and strong and, as the original limb hollows and dies, takes over as the primary limb/s. It often splits under weight of its thick, gorgeous canopy but it is resistant to the perishing diseases that other trees would usually get at the fracture site and so can continue to thrive fractured in multiple pieces. Thus the tree just keeps growing outwards and reaches a mighty girth. 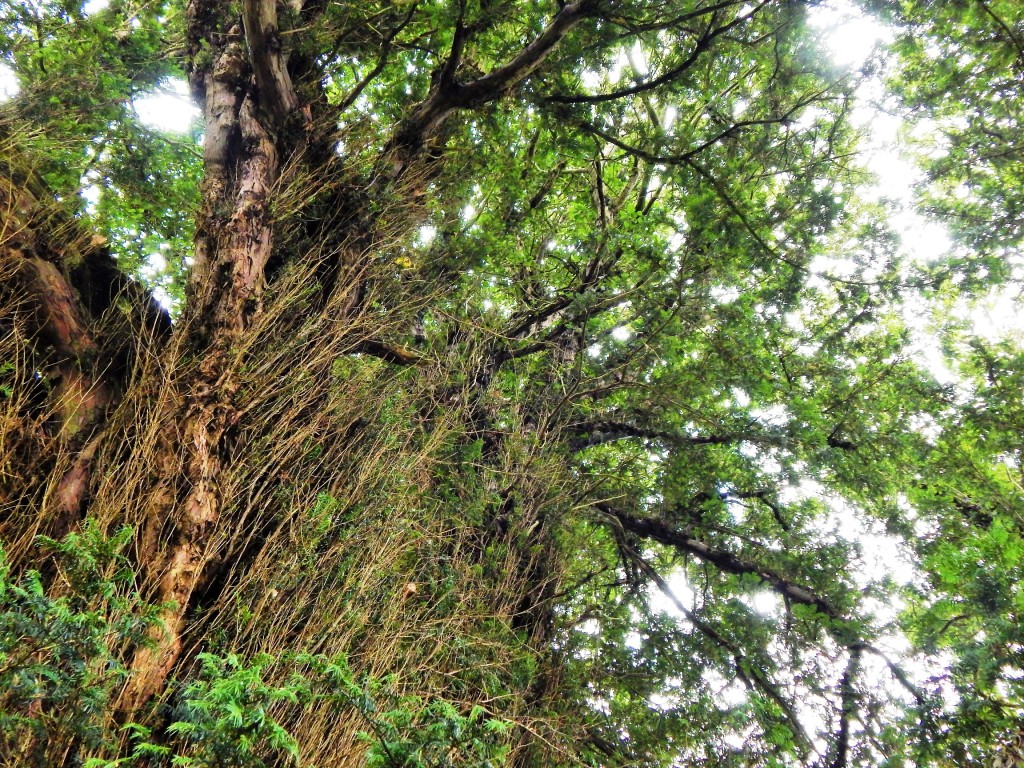 Scientists can’t agree amongst themselves if a tree can be considered the same tree if the tree that we see today is the great, great grand-sucker of the original and the site of the original is now just a hollow middle. Personally, I think scientists need to consider the WHOLE tree and not just the emergent part. To my mind, if all of the tree’s activity is coming from the same living root mass then it’s the same tree. It’s just going through its life stages. Humans shed our entire skin multiple times across our lifetimes and no-one would suggest we’re not the same person… 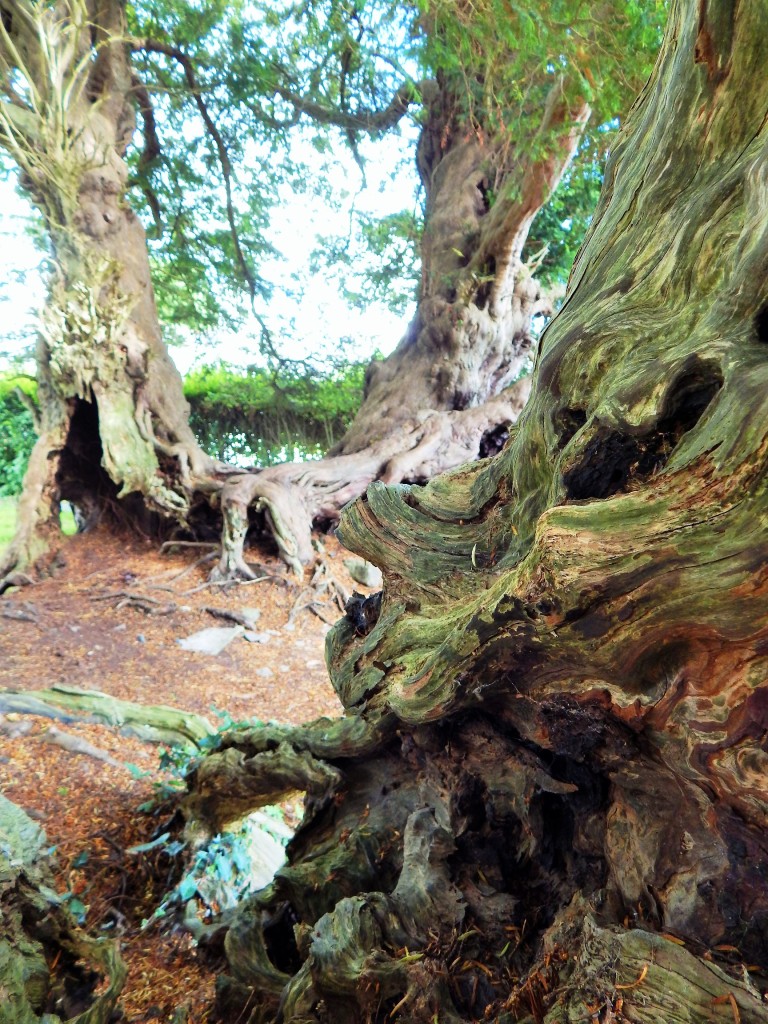 Ancient yew at Llangernyw, split over centuries but still thriving

The yew features in some of our oldest human cultures. The oldest known a yew spearhead (or ice pick), found on the coast of Essex that has been carbon dated back 450,000 years.

The celts (all over Europe) revered the yew (which they called eburos) and a Gaullish tribe even named themselves for it (the Eburones). The elderly chieftain of the Eburones elected to poison himself with yew rather than submit to Rome in 53BC. In fact, death-by-yew appears a popular and traditional way to suicide (politically) in the first century.

The oldest yews persist in churchyards where they enjoyed particular protection by connection with the church. In places, religious ceremonies were even held inside the gaping heart of an ancient yew. The yew tree at the Chapel of St Anne (La Haye-de-Routot) in Normandy has even been formalised by the provision of a door into the abundant hollow beyond. 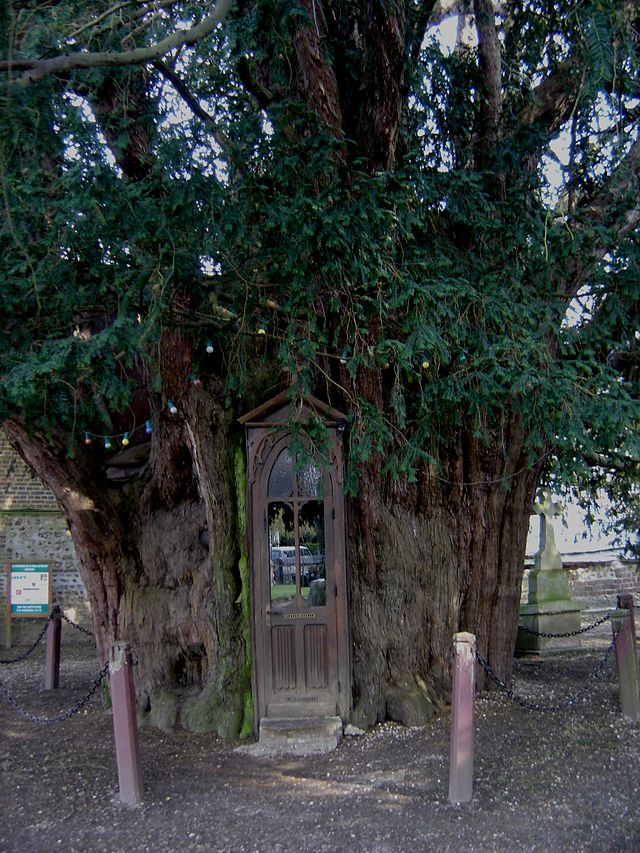 “LaHayeDeRoutotIf1” by Gérard Janot – Own work. Licensed under Creative Commons Attribution 3.0 via Wikimedia 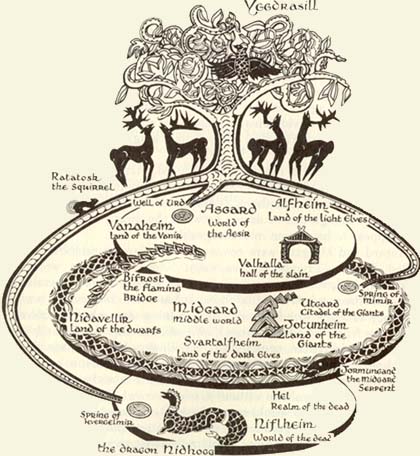 It has been suggested that the Sacred Tree at the Temple at Uppsala was a yew tree, and scholars now believe the legendary Norse Yggdrasill was a Yew and that references to ‘ash’ were a mistranslation (an alternative Old Norse name for the yew in was the Needle Ash). Ancient sources also refer to the tree as ‘evergreen’ which a yew is but an ash is not. Intriguingly, Odin supposedly had a revelation after hanging from Yggdrasill for nine days. Maybe the wisdom of the runes came from a taxine hallucination and not the gods!

Yew timber is the hardest of the softwoods, but has high elasticity making it perfect for bows. The longbow, developed in northern Europe was the basis of medieval war tactics and the best longbows were carved from yew timber. The oldest was radiocarbon dated from between 4000BCand3600BC. The bows are constructed so that the strong heartwood is on the inside of the bow with the elastic sapwood on the outside.

Yew is knotty and twisted and challenging to make something as straight as a bow. Much of a yew trunk would be discarded in the creation of one bow. This led to the extirpation of yews across northern Europe (to feed the demand in Britain) in the 500 years after the Norman invasion of Britain. By the 17th century, there were no more mature yews to be had and focus was now shifting to guns anyhow. Yews were able to recover a little.

The yew was greatly prized amongst medieval, renaissance and baroque luthiers for lutemaking, too. I was lucky enough to bring home a carved yew druid from my Welsh adventure and the wood is so beautiful—a mix of honey and chestnut colours—it would have made a sonorous and gorgeous musical instrument.

Parts of the yew bark have been discovered to be effective anti-cancer compounds and it is used in the Central Himalayas as a treatment for breast and ovarian cancer, particularly. So much so that the Asian sub-species of yew is now on the threatened species list because traditional harvesting techniques required the death of the tree. Happily for the Himalayan yew, scientists have synthesised a much more effective chemo drug from the yews leaves instead of the old timber and bark, which might help slow the rampant over-harvesting of yews for pharmaceutical purposes if handled responsibly. Finally, I visited the Llandudno workshop of chainsaw artist Dave King and brought home my own yew memory–a gorgeous druid carved from a yew that was felled for housing development (Dave uses fallen timber and purchases a lot of it from landfill).  Dave estimated the yew he hauled home on a massive truck was 2000 years old before some developer bowled it over to put up a shopping centre or housing estate. He’d already made hundreds of pieces from it including the two dragons below and dozens of druids like mine. 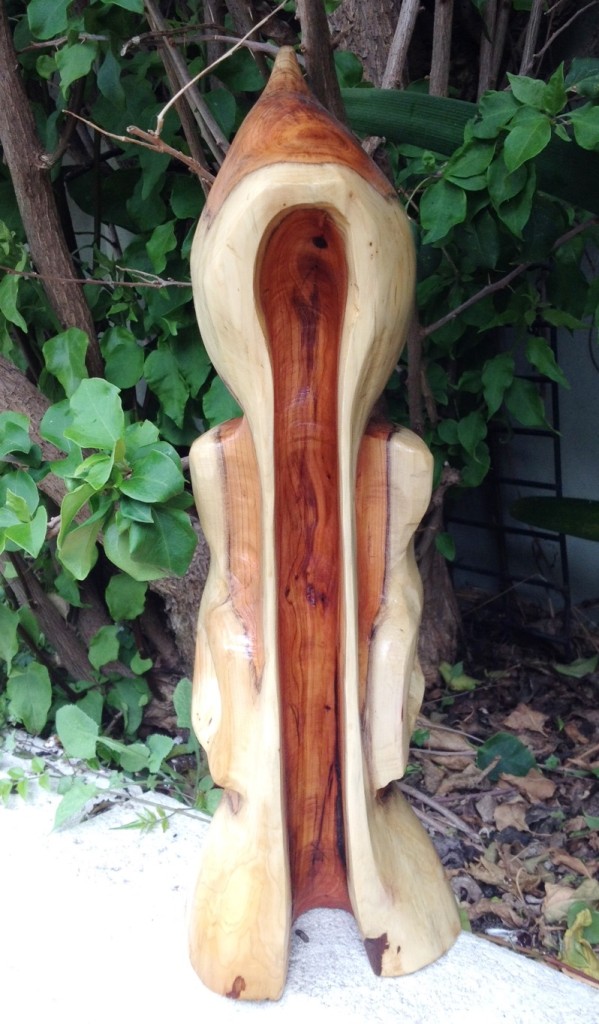 My yew druid in its new Oz home

Some of Dave’s other works on the day I visited, below. Both dragons are made of yew. The biggest was destined for a primary school. If I didn’t have to get on a plane a few days later I TOTALLY would have purchased the dragon on the right. And check out the massive one further down below–Dave made for the National Trust to sit up in the mountains where the legend of Dinas Emrys reigns. 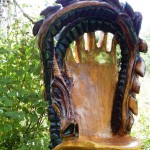 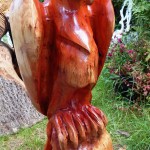 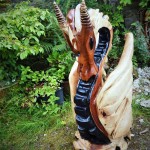 So there yew go… everything yew never knew yew needed to know about the yew 🙂 Gorgeous alive, gorgeous immortalised in art.  And a fantastic part of my trip.