Something you should know about deserts. There’s sand everywhere. Everywhere! Three kinds, in fact, in the deserts of Dubai. And one of those sands is this fine, almost talcum-powdery type sand that gets into everything. No matter how hard you work to keep it out.

I liked this sand because its advanced state of erosion meant it was really ancient and (as you’ll see abundantly in the weeks ahead) I get excited by really old stuff. But, I liked this sand less when it tried to kill me.

Anyone who’s ever stepped into their shower with feet covered in the talc that the last bathroom user left dusted all over the tiles will understand…when it gets wet, and it’s on your feet it’s slippery as all getout.

So picture if you will…

I was dead keen to get a photo of myself doing the pose you see in all the Al Maha literature. Staring out absently from the infinity edge of my pool. Like this one…

But I had a few limitations. First, I was travelling alone, and–given I was not prepared to call up a member of hotel staff and force them to witness my bathing suit splendour just to take my photo–I had to do an old-skool selfie, with my camera’s timer function. But that only gave me 10 seconds to get from camera, down the pool steps, across the pool and lounge captivatingly at the far end of the pool.

Now, the pools are only small but not ten seconds small.

My first attempt caused a water displacement of Archemedian proportions after which I had to wait for the pool’s water level to refill enough to fulfil the infinity effect.

I adjourned to lunch to think through this dilemma (and because my camera had ceased to work courtesy of the extreme heat outside…and because I’m a sulky princess…) and later in the day I had another go with a MacGyver towel arrangement up to the pool’s edge to ensure clean feet, a new camera position engineered to rival that of the Burj Khalifa (on a cushion balanced on a chair top with other cushions to catch it if it fell), and a cleverly submerged doormat to stop me from sliding down on the steps.

I had to remove the doormat after it filled the pool with delicate and tiny shards of grass matting and then do a laborious water clean-up (sans Greenpeace volunteers) with two arms wrapped in twisted towels; the kind of rehab more commonly seen out in the Gulf oil-fields. And without the doormat to arrest the inertia of me plummeting down onto the steps, it took three goes to get a pic in which the photo wasn’t taken with my legs in the air as I over-shot my mark, or as my over-zealous dive caused another Archemedian mini-tsunami. Though there were pretty good shots right up until the moment I deleted them.

But I am nothing if not determined. Finally, I got my man. And it’s close enough to what I wanted to make me happy. It is also assuredly the only time you’ll see me on the internet in a swimsuit. 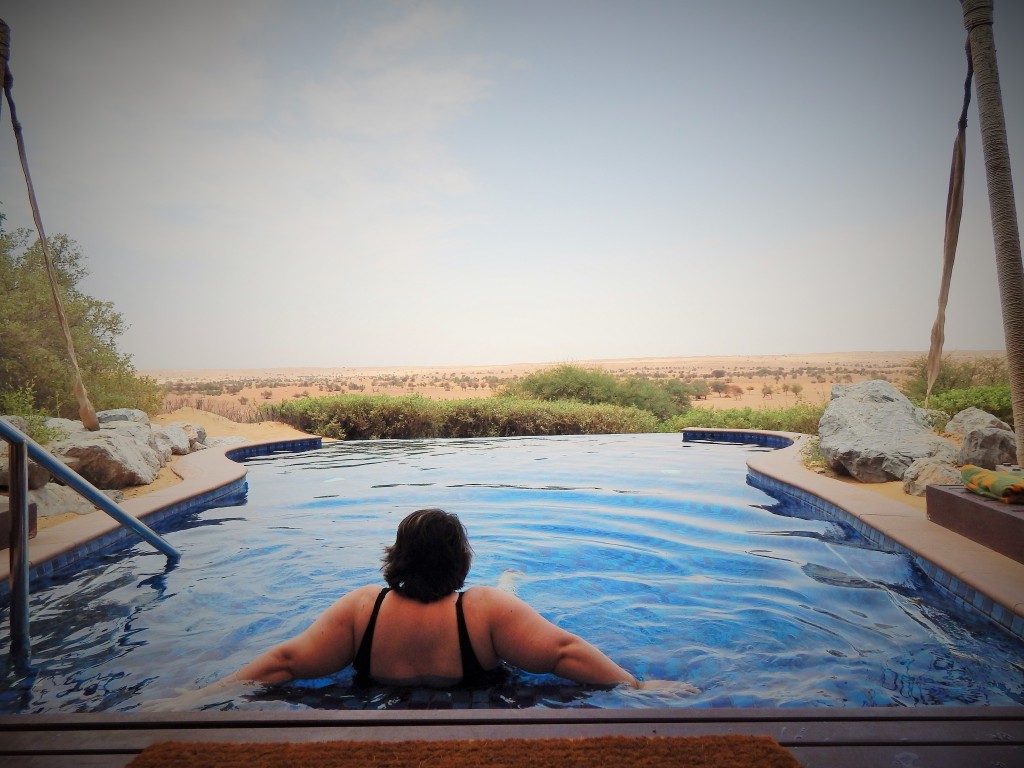 I very much wanted to watch an Arabian sunrise and so I called Ankoush to see if this was okay. This is how our conversation went…

Me: Hi Ankoush, it’s Nikki in suite 10. I’m just wondering if it’s okay for guests to use their pools at night?

Ankoush: Of course. But first turn on your pool light to make sure there are no vipers in it.

Ankoush: The vipers are nocturnal and like to cool off.

Ankoush: Go back inside and call me. 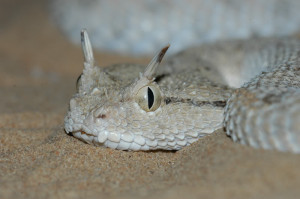 Great advice for life general, no? Retreat and call for help. That’s what anyone sensible would do. But me..?

Suddenly I had something else on my Arabian must-see list. The exotic and elusive Arabian Pool Viper. I wanted a viper to call my very own. I would hug him and squish him and call him George…

Alas, 4am came and I gingerly emerged onto my deck with a lovely cup of Arabian tea, flicking on the pool lights and waiting for the dozen vipers having a pool party to shoot off back into the spinifex, but…nothing. Just a lovely, still, viperless pool. 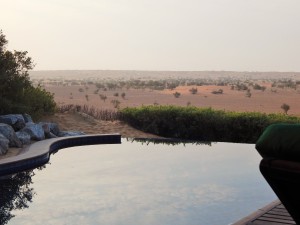 The sun began rising in the desert around 4.30. I thought I’d be the only one up but, sure enough, I could see the headlights of the resort staff taking supplementary feeds out to the assembled oryx in the distance. A little later, another one was hard at work cleaning up the oasis in front of the suites and I imagined him doing a Zoo-esque exhibit prep before the customers all started emerging (later, I learned they have to dredge the various artificial oases daily because they fill up with sand so very quickly).

Anyway… at 4.30am it was just me and the guy two clicks away in the expensive utility. 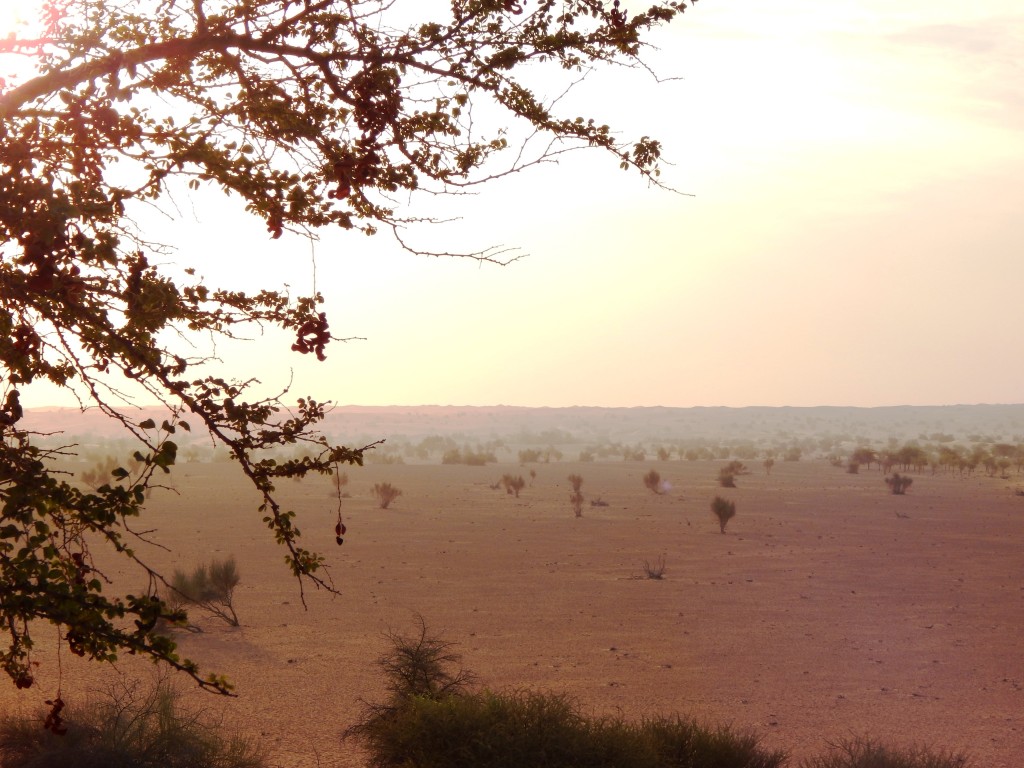 My sunrise was as beautiful as I’d hoped though east turned out not to be in the direction I thought it was and so it was a bit obscured by the foliage that kept my suite private. There were dozens of birds performing their dawn chorus and the only other sound was the tinkling tumbling of my pool water as it washed over the infinity edge and into the reservoir to be recycled, filtered and pumped back in. I tucked myself as far over as I could (to see the sunrise) and stood as still as I could in the water (to minimise the pool/water noise). And thus I floated there, cheek resting on the cool pool tiles, eyes gently closed.

And then I hummed.

Now, I had a full ‘arabian’ soundtrack that I’d pulled together for my visit (and which I’d been feasting of in excited anticipation before I left) which was full of tunes I could have chosen to sing at that moment but instead I found myself breathing the silence and belting out Seer’s Chandelier instead. And by belting out I mean in my head, cos animals were sleeping. And maybe people, too. Aloud, I was little more than humming, but cranking it out in my imaginary rock video with all the carthartic expression that comes with that great song.

So I paddled my feet, and rested my cheek and hammered out the chorus on repeat in my head (cos I don’t really know the rest) and generally waited for dawn.

When I paused for an emotional breath, I heard a slurp that didn’t sound like my pool filter and some disturbingly close breathing. I opened my eyes and found this guy standing there… 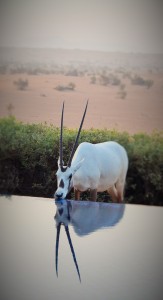 Or at least the animal on which the mythical creature is supposedly based. The Arabian Oryx.

I have to imagine that this guy had a particular foraging trail and the pool of #10 was in it, because he had a dozen empty pools to my left and right to pick from yet he picked the one with the crazy singing lady in it to visit.

Oryx are on the ‘look don’t touch’ list in the resort because of their headbutt-first-ask-questions-later habits and so I floated backwards, viper-like, until I felt the pool stairs bump my butt. He drank the whole time, keeping a close eye on me. Moving slowly I left the pool, dried my hands, grabbed my camera and started snapping pics and some video 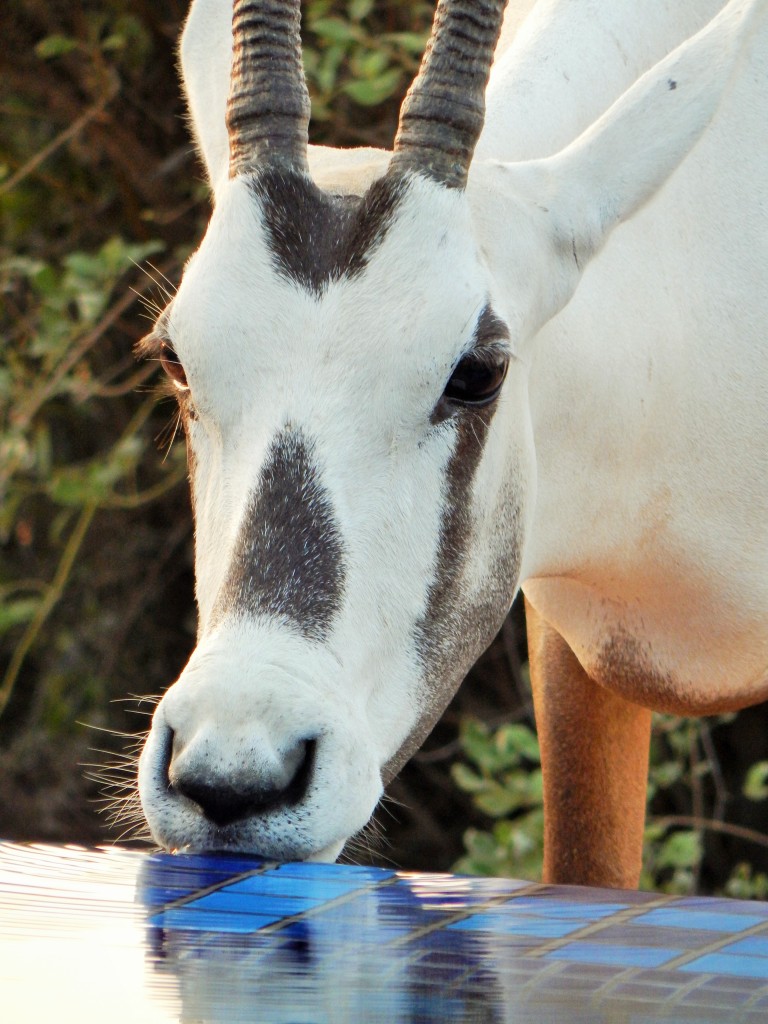 All in all he drank for over 15 mins, stocking up for the day, then farted the farewell of his people and wandered off back down to the coral flats (more on them another day).

He may also have upstaged the sunrise just a smidge, but I got some gorgeous photos of the desert as the light changed and then, a little later in the morning, when I went to watch the falconry display which you’ll be hearing all about tomorrow.