(and, no, Courtly Love was not married to Curt Cobain… )

Modern romance (and modern romance readers) owe a debt of gratitude to the dark ages for the development of the practise of ‘courtly love’ (or ‘chivalric love’ with which it was closely allied).

Marriage, back then, was a dry affair, usually connected to strategic increase in power, wealth, territories or favour which meant women across the country living in marriages that, at best, would have held affection and respect for their partners but very unlikely to have been great, passionate love matches.

All that passion had to go somewhere. 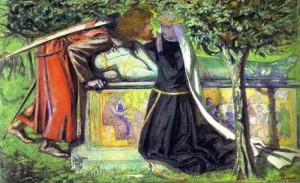 Dante Gabriel Rossetti – Arthur’s Tomb: The last meeting of Lancelot & Guinevere (aka “No I mustn’t because I’m virtuous and my denial of you will only make you stronger”)

But whether the principles of Courtly Love were literal or purely fictional is a point of disagreement between experts. Like critics of modern-day romance there appears to be a presumption that the consumers of the medieval literary convention were either morally deficient or lonely enough to act out the desires and taboos set out in the tales or intellectually incapable of recognising that it was just pure, escapist fantasy. It took place primarily in the minds and imaginations of the medieval well-to-do.

True ‘courtly’ love—the admiration between knights and ladies or queens and their courtiers or other high born nobles—was primarily glorified flirting in which the woman’s virtue in rebuffing escalation is both desirable and a curse for the worthy man who cannot contain his ardour. He has no choice but to undertake great deeds to demonstrate his worth. It was restrained and forbidden and private-yet-not and exactly as angst-filled and breath-stealing as a lady (or a knight) could wish.

Some historians believe that these stories role-modelled positive social behaviour for young knights by showcasing great acts of valour for the unattainable woman, a pure, admirable, respectful love. The right kind of qualities and the right kind of woman.

Yep, you tell yourselves that historians. I’m not sure you can have it both ways. If these stories didn’t influence the women and men of the time in terms of romantic illusions then why would they modify the social behaviour of young men with too much money and too little obligation?

Courtly love was being consumed en masse by the ladies of the court. Dramatic and poetic narratives, poems and songs glorified and publicised both chivalric code and courtly love and grew in the breasts of upper-class women across the kingdom a desire to be so worshipped by a good and brave man. Travelling troubadours could recite entire hours-long tales of honour and bravery much to the delight of the knights listening. But they liked to eat, too, and so it served them best to weave in elements for the delight of the high-born women in their audience.

Thus courtly tales and chivalric tales began to merge and turned into long, drama-filled tales of passion-denied, the love unspoken between a brave, honourable knight and the woman that could bring him to his knees. The knights and the ladies in the audience listened, wrapt, to these breath-stealing, beautiful stories of lives so much more exciting than theirs, and acts so much more virtuous and romantic than they ever saw, and they did it amongst each other. Which only escalated the rush.

Are ya sensing a theme here…?

Courtly love disempowered men in the service of their lady the way it disempowered knights in fealty to their liege. But the beloved is his inspiration for extraordinary deeds and so it was construed (and thus tolerated) by men as an ‘ennobling force’ and the loyalty and love as highly virtuous. As for the women, given that this convention was entirely contrary to the relationships between males and females of the time it is not hard to see what they found appealing about an artform in which men were obedient and submissive and seeking only the pleasure of their beloved.

Isn’t that what we still love about a great romance? A man—capable or powerful or loyal desirable for other fine qualities—who puts the heroine ahead of all else and who protects and worships her long before he declares it. And our heroines (much like the ladies in the tales of courtly love) are good and virtuous and brave and stoic and they don’t need him to be whole themselves but oh-my-goodness they want him. And the entire plot revolves around why (it seems) she can’t have him. Until she can.

Andreas Capellanus  (French but tell me he’s not Roman) captured some of the principles of courtly love in the twelfth century. Capellanus was a learned and religious man and, thus, opinion seems to lean towards this being a satricial work, poking fun at the conventions of the popular form of the time and the minds that enjoyed them.

So romance has been a target for that since the middle ages. Awesome.

Certainly Capellanus has done a bang-up job of belittling the popular ideology of the time. And in contributing to the portrayal of the women of the middle ages as vain, empty-headed ninnies. I hope my editorial additions make it clear why these stories must have been such fun—and such adventurous fantasy—for women who were primarily valued for the depth of their gene pool, the size of their purse and the girth of their hips.

Lord knows they needed something to smile about.

Cappellanus’s Courtly Guidelines for Her…

Cappelanus’s Courtly Guidelines for Him…