Wales is full of myth, legend and massively exaggerated truths. It’s what makes it so much fun to visit. Terrific tales of wonder or bravery or legend often tied to physical places so that a visit can be layered with extra meaning.

Here are a couple of those places and the (greatly simplified) tales that go with them… These three relate to three particular female saints and it’s not hard to see a common thread through them–women abused and misused who go on to be greatly revered. Each is a real person in a real time in Wales. 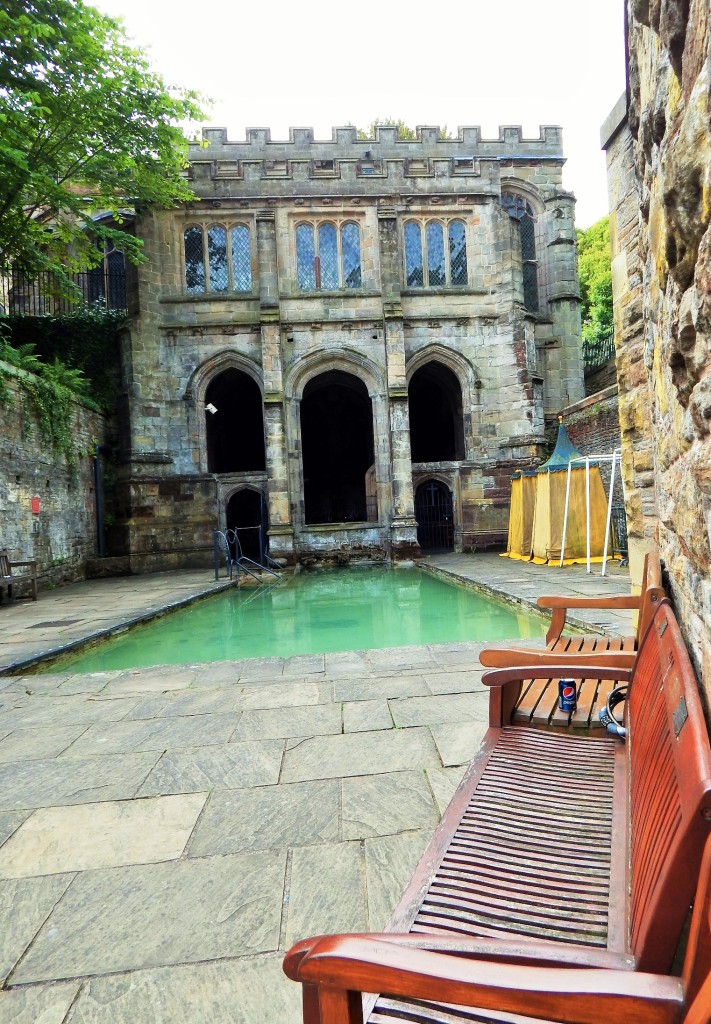 The formalised structure built around the original well of the myth

The legend of Gwenffrewi (St Winifred) at Holywell, Clwyd

Gwenffrewi was a pious, beautiful young noble woman who lived in the far north of Wales (near Chester) with her family in the 7th century. Her uncle was Bueno, a monk and her teacher, who had a church in the area later to be known as Holywell. Along rode a prince, Caradog, who was so struck by Gwenffrewi’s beauty and piety of course he just had to ruin both. He propositioned her, she refused, he tried to steal her away, but she managed to break-free and run to where she knows her family were. Bueno’s church.

Sadly for Gwenfrewi, Caradog caught her on the steps of Bueno’s church and lopped off her head in fury. It rolled down the hillside and came to rest at its bottom whereupon a spring burbled forth to engulf it.

Bueno emerged, saw the murder and cursed Caradog who pretty much dropped dead on the spot and was sucked straight to hell. Some versions of the tale talk of the ground literally opening up and swallowing him.

Bueno dragged Gwenffrewi’s body and head together and sprinkles the wound with the newly burst-forth water and she is restored to life.

She goes on to live a long and healthy life as the abbess at nearby Gwytherin, carries the scars of Caradog’s attack forever, and pretty much has nothing further to do with men (except her uncle) from that day forth. Can’t really blame her. 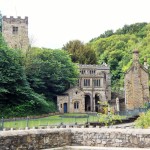 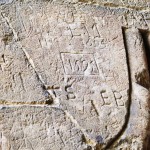 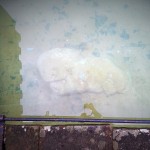 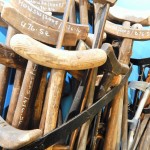 Ye olde crutches of those who were healed in the past

This incident (and the subsequent healings that took place at her well) earned Gwenffrewi (Winifred is the anglicised name) and Bueno sainthoods. Back then, sainthood was by popular acclaim not canonisation but Winifred is officially recognised as a saint by the Roman Catholic Church. The little museum at Holywell is filled with the ye olde crutches of people who were able to walk after bathing in the spring, and the walls are etched with centuries old testimonials from people similarly cured. Even now, stories of miraculous recoveries are collected by the curate of the well. Holywell was so famous that a series of kings protected and expanded it so that, today, it stands as the most impressive of Wales’ many holy wells.

(Sadly, this well/site is so oft-visited and ill-used by the so-called pilgrims who flock to it that it struck me as dirty, tarnished and abused. Bins overflowing with nappies, toilet paper all over the floor, soda cans left wedged into the old stone walls. I felt incredibly sad in this place which, I’m sure, is not the intent. I limited myself to taking photos of the bits that were least shabby.) 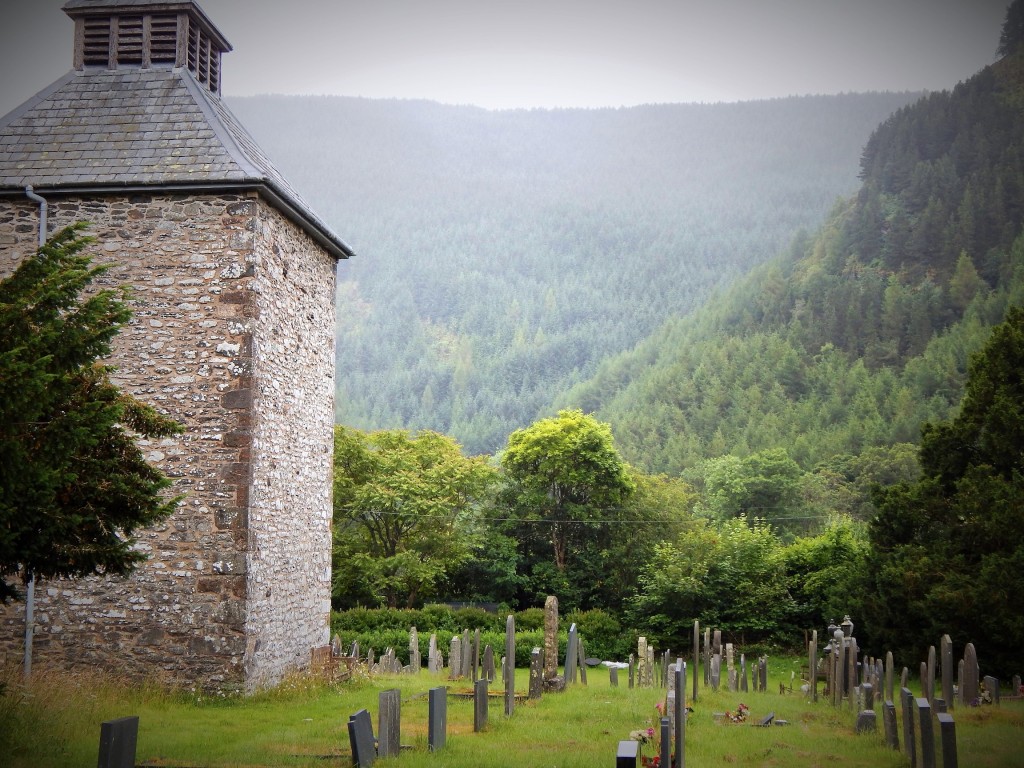 The legend of Pennant Melangell

Melangell was a young ‘Irish’ noble woman in the 7th Century whose father married her off to a brutal lord whom she flees by hiding out in the mountains of north Wales and dedicating her life to the Lord (back then the term for ‘irish’ apparently also applied to the scots so it seems most likely that she came from the north of Britain since it would have been easier for a girl to flee alone across land than sea). Anyway, there she lived in total isolation for years, living off the land, being all beautiful and pious and hermit-like until…along rode a prince out hunting with his dogs who chased a hare into Melangell’s valley. The hare dashed under her skirts (she was out praying) and the dogs would not pursue it no matter how urged by the prince. He was so awestruck by Melangell’s beauty and piety and so frightened by his dogs’ strange behaviour that he gifted her the valley (Pennant) and committed it to be a place of safety where any in need of sanctuary should be able to go and live unmolested. Human or animal.

Melangell became Abbess there over women who all sought shelter from abuse/harm and for centuries none would hunt Melangell’s little lambs (hares) in the valley. She grew old (for her time) and died there and was interred in the church that stood there then. Her relics are still believed to be below the church and the restored Romanesque shrine there is believed to be the oldest in Britain.

In complete contrast to Holywell, Pennant Melangell is rich with ‘vibe’, stunning to look at and much more satisfactory as a spiritual experience. It’s a beautiful and interesting church & graveyard, the site is full of intrigue and richness and it really couldn’t be more beautifully situated for a girl who loves both trees and topography. Top two for my whole visit (the desert was the other one). 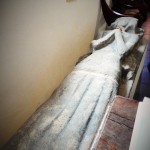 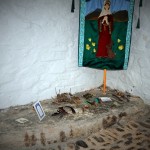 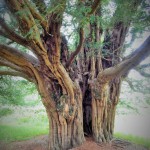 One of multiple aged yews circling the Church of St Melangell

The legend of St Non

Nonita was a noble-woman, the mother of the patron saint of Wales, St David (Dewi). She was celibate and was minding her own business one day in the south-east of Wales when…along rode a prince from a neighbouring kingdom who was so taken with her beauty he had to have her for his own. The resulting child was foretold to be a great and powerful preacher and a local ruler feared its power and so plotted to kill it upon birth. But on the day of labour, a massive storm blew up making it impossible for anyone to be out of doors. Nonita’s little field/home was (the legend says) bathed in light in the midst of the storm and she gave birth on a great crack of lightning, leaving her finger marks in the rock she lay out onto birth David, and it split asunder under her fingergrips.

Depending on the legend version, the stone became part of the foundations of the original church built there (which is now also built over with a ‘new’ ruin) or it’s still in the field where she went into labour. 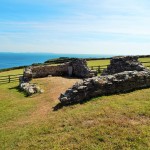 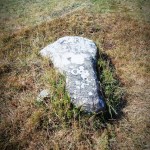 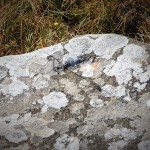 History confirms that Nonita, Gwenffrewi and Melangell were all real women of the dark ages leading real lives. None were sainted in their lifetimes but only after their legend/s grew massive and it was done by popular demand. Each was a beautiful, devout, young noblewoman (the top three desirable traits for women in the dark ages) and each was in some way the victim of men who had the power, right and immunity to take whatever the heck they wanted — probably the top three desirable traits for men in the dark ages. (Even the prince in the story of Melangell wanted to take her; it was only his fear that she might be of the otherworld [and the retribution that would bring him] that tempered his interest).

The moral of the story… women were both instruments of power (but only insomuch as they were wielded by men who married or traded them off for political ends) and vulnerable to that power.

And it really didn’t pay to be beautiful, pious and noble. 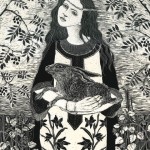 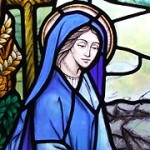 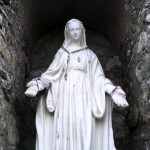