Thanks to a series of technology failures, I wasn’t able to blog as I had hoped on my recent trip to Dubai and Wales. So I’m going to blog retrospectively in day-sized bites for those who were looking forward to following my trip.

Just imagine I’m still there. In spirit, I kind of am. 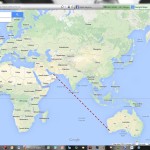 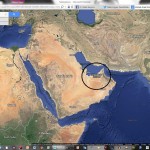 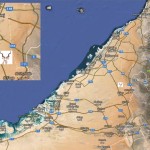 My first impressions of Dubai were tainted. I’d lost an important family ring on the flight on the way over (right off my finger) and despite the best efforts of the above-and-beyond Emirates cabin crew, the ring was never recovered which meant someone on the plane picked it up and kept it. I blamed Dubai for that. Like they don’t have enough bling already…

Looked like I was off on a miserable foot straight away. Yay.

The airport was not at all as scary as I’d imagined with their long list of cultural prohibitions (and on departure I found it to be an AMAZING airport), but the cultural pride I’d read about was out in parades for me in the arrivals/immigration area. I was tired, bedraggled, nervous, and ringlessly grumpy and could have done without the arrogance of the formally dressed staff who operated the immigration area. They joked around with each other in their own language (which, on its own I have no problem with but its excessive volume seemed designed to reinforce our alien-ness), leisurely checking their phones for messages and emails which they took their time responding to, changing shift/stations laboriously, and—when the mood took them—waving the next lucky contestant from the snaking lines forward to be processed through their aisle. No eye contact at all (even when checking my face against my passport which seemed kind of important) and I never did discover if that was courtesy or contempt. It was surprising, given how much importance Dubai puts on tourism and given how fundamental a first impression is, that the customer service here was so poor.

The female staff elsewhere in the airport, by contrast were delightful and eager to help. Thank goodness for them. And in the airport they outnumbered the male staff 2:1 so maybe the airport authority knows they have this PR problem?

Outside, we drove around the city of Dubai, to get to the connector roads for my destination — Al Maha Desert Conservation Resort. I’ve never been much on cities and so I didn’t even ask my driver to detour through the centre so I could have a look. That was probably a missed cultural opportunity but, I gotta say, the sparkling jewel of the Emirates was pretty tarnished that day, blanketed in what I thought was smog but turned out to be a kind of seasonal mix of mist and fine dust. It certainly didn’t look at all like the (many) tourist photos you see. (The smog in the background of the pic below is just about right…)

What I did notice from the fringes is that Dubai is a technically tidy and correct city (nothing’s worn out…. Of the tens of thousands of lights that line the eight roads in and out of Dubai, I didn’t see a single blown one, that’s quite an achievement by itself) and the city, of course, is an architectural marvel. I had to remember how young it is. Some of the buildings and roads were less than a decade old. And the ruling family certainly know how to do presentation. Everything was so…maintained.

It doesn’t hurt to remember that Dubai has the highest carbon footprint per head of population. By a factor of thousands. This city is gorging its way through the annual resources of a small country every week.

And now I was part of that. 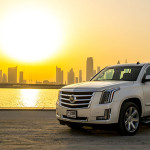 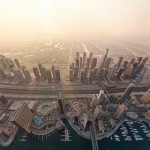 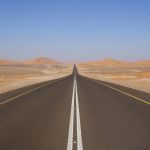 CLICK: All the roads I travelled on were eight-lanes but this is pretty much how it looked…

But not for long! I’d spent the extra to have a private car take me out to Al Maha and I’m so glad I did. Black and massive (and making me immediately think of the vampire Escalades that I know from JR Ward’s Black Dagger Brotherhood series), my pimp-mobile was so well air-conditioned that I had no sense of the heat outside — until I leaned on the passenger window and just about burned my arm. The luxury dash display told me that it was 20C inside and 54C outside on the tarmac. Yikes! That’s what happens when you decide to visit an arabian desert in the height of summer, I guess!

My driver was from Pakistan (Dubai is filled with international workers, not all as happy as this one) and he freely answered my questions about the country, the customs and the ruling family and offered me a good introduction to the massive city that had emerged from the sand in a decade. We drove past the foundation work for a 50-fivestar-hotel site that was a special project of the ruling Sheik. I found that astonishing given that most of the massive and beautiful buildings I’d seen on the travel websites lining Dubai’s shore like towering jewels were already hotels. And they need more? By contrast, though, we also passed the very disturbing ‘labour camps’ where the immigrant construction teams come from. I immediately thought of the stories I’d heard about retained passports, low wages and enforced labour. I asked my driver what it was like for them in there and whether they had air-conditioning. I think I kind of expected some solidarity from him as a foreign worker. But I got the party line and it was then I started to question just how thick was the veil that westerners viewed Dubai through.

Fortunately, something was about to happen to wipe ALL of that from my mind like a beautiful, beautiful drug…. 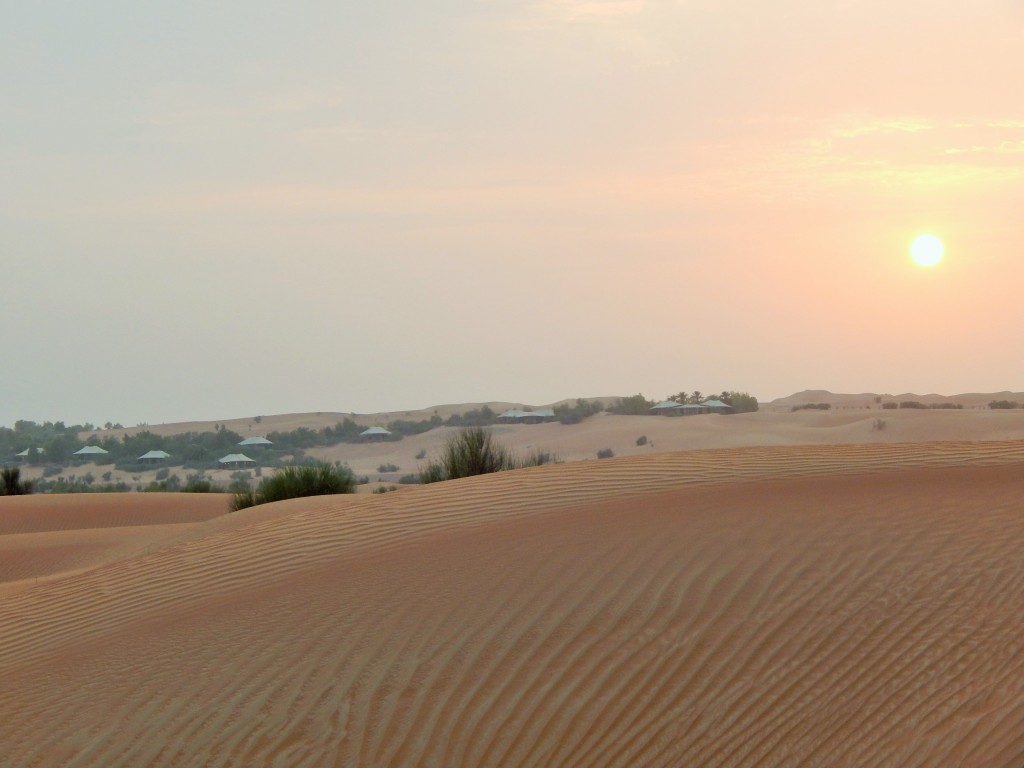 I have two words for you.

Despite the city’s size, it really only takes ten minutes to get out into the desert because—well—Dubai is ALL desert. Where it’s not some insanely expensive concrete, irrigation and glass. The further into the desert we got, the more the haze (a mix of sand and smog) cleared and the bluer the sky became. Our massive, pimp-car was eating up the highway at 140kms and we certainly weren’t in the fast-lane – some very expensive looking vehicles raced past us. Lane adherence, indicator-use and even seatbelts seem to be optional in Dubai but I held my breath and trusted my driver to get me to Al Maha in one piece.

My welcome to Al Maha happened in stages. An imposing but comforting entry statement just as I began to fear I was being driven out into the desert in the first stage of a people trafficking con. Then, about 5km further on, an isolated little security controlled station with the first friendly Emirati man I’d met who checked us in and waved us past a row of shadecloth covered carparks where (I later discovered) even the very wealthy must leave their sports cars and $250,000 SUVs. No private cars on the resort. Period.

Another 5kms and I saw it… exactly as I’d imagined. An oasis in the dunes. Literally. Al Maha has ten bores within the resort keeping its grounds livable. 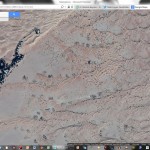 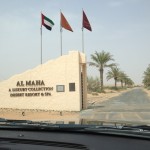 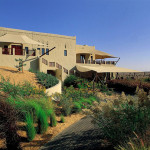 Al Maha is a top-of-the-wozza 5-star luxury resort. I’ve stayed 5-star before and I’d give this resort a sixth-star for wow factor alone.

Not only are the buildings stunning examples of traditional construction and furnishings (and in a really tasteful way, not a replica theme-park kind of way) but they have been nested so beautifully into the natural desert environment. The resort comprises a cluster of central buildings (restaurant, reception, library, day spa, pool, gym) which act as a hub for the strands of bedouin style ‘tents’ which have been constructed on the natural topography so that each one has a stunning desert view.

Yeah. I’m going to be using that word a lot. Stunning doesn’t even touch the sides.

On arrival I was met by guest liaison, Ankoush, and my nature guide, Lawrence (of Arabia… get the giggle out of the way now…). They whisked me out of my pimp car and straight into the air-con inside and thrust a glass of the most amazing and icy fresh-squeezed juice into my hand. We were in a beautiful little lounge filled with regionally appropriate furnishings, in a world totally new to me, and I was being attended by not one but two handsome men whose entire existence in that moment seemed to hinge completely on me and all I could think to do was suck on that straw like a newborn and gasp “oh my god, what’s IN this?”.

Yeah. Winning friends and influencing people straight off the bat.

Did I mention it was Ramadan and I was in a majority Muslim country invoking a Christian god that isn’t even mine? Lawrence winced a little but Ankhoush (bless him) just smiled widely, flashed his dimples and said ‘Good, huh? You want another one?’

Loved him. Right to the end.

So… I have this awful memory of myself in that moment trying so hard to look composed but really having that deer-in-the-headlights expression my mother gets when she’s dazzled by anything. In fact I channelled my mother a couple of times on that trip. They ran me through how everything would work and Lawrence talked me through some of the nature-based experiences the resort not only offered but kind of demanded you take.

Part of Al Maha’s ethos, it turned out, was to ensure that visitors really engaged with the desert, not just stared at it. I was more than happy to oblige.

A few moments later, camel ride booked for later that evening—second juice in hand—I was carefully bundled back outside into the heat (noooo!) and into the same golf buggies we used in my Zoo day job and whisked down one of the long, flora-lined pathways to my suite. Suite 10.

They don’t look like much from the back and with all the fine sand everywhere and the desert-loving flora all around I kind of felt at home after years of holidays on the equally sandy Rottnest Island. But that’s where the similarity ended. Ankoush pushed open the gorgeous timber doors and waved me inside.

Before the end of the week I’ll tell you all about the suites, the pool and the gorgeous, breath-stealing desert. Make sure you watch for it…